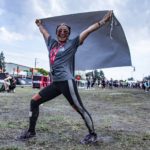 Alisha has not always been fit or into fitness. In fact, she spent her childhood and teenagehood years playing computer games, fighting monsters and levelling up. In her defence, she was one of the top players in her server.

She discovered fitness during her second year of university, where she randomly decided to join a pole dancing and aerial arts club. In trying to improve her flexibility and strength, she also dedicated more time in the gym. The following year, she discovered the beauty of weight training.

Now, she spends her fitness time making gains at the gym, pole dancing as a back-up career path, and running around a park with Spartans.

Alisha grew up in Bournemouth, England and moved to London for university. There she studied Chemical Engineering at Imperial College London, and then moved to Tokyo on a scholarship to study Japanese and work here until March 2018. She hopes to continue on her Japanese life post-scholarship.

Despite growing up in a coastal town, she rarely went outside to enjoy nature because she was too busy levelling up her character. However, since moving to Tokyo, she finds herself frequently outside, in gym gear or a bikini, and loving life.
Insta: @alisha_tl