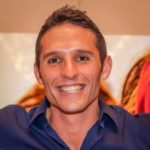 From his days as a toddler on the soccer field to his little league days as a shortstop to the endless hours with a tennis racket in his hand, Michael spent much of his childhood on some sort of field or court. His dad snuck him into his first gym when he was 13 years old even though no one was allowed who was younger than 15. Once he went away to college at Duke, he realized he was not nearly good enough to play sports for any reason but fun and to stay in shape. After a brief stint in the fraternity intramural softball league, team sports soon gave way to bikram yoga, spin classes, and triathlons. In his current life, he has added bootcamps and Insanity workouts to the repertoire. Rarely a day goes by when Michael isn’t doing something to get a sweat on. And if has nothing else to do, he usually can be found trying unsuccessfully to do a handstand.

Michael grew up in the suburbs of New York, studied economics and art history at Duke University, and has lived in New York City, Hong Kong, and Tokyo as he has attempted to navigate his way through the corporate world.

Michael is passionate about photography and can often be found roaming the streets among the people with a Nikon in his hand. Through the lens his camera, he explores the meaning of human life and how it fits into the broader fabric of existence. Michael’s photography and writings have been featured on a variety of travel blogs and websites, including the Huffington Post. His Cuban photography has been featured in NYC restaurants and as cover artwork for a Spanish blues album. He is the author and editor of a photography book called “Life Living Life” in which he explores the art form as a means of human connection. Michael’s photography and philosophical musings can be found at http://www.michaelsloyer.com

Michael is also passionate about helping humanity live up to its potential and to live the most loving, compassionate, and fulfilling lives possible. To help achieve these goals, he leads workshops that, through a personality classification framework called the Enneagram, allows people to understand themselves and the people they interact with on a much deeper level. His favorite feeling in the world is when he sees one his of his students or a close friend with that look in their eyes when they feel truly understood for the first time.

“The privilege of a lifetime is to become who you truly are.” – C.G. Jung

Back to All Leaders